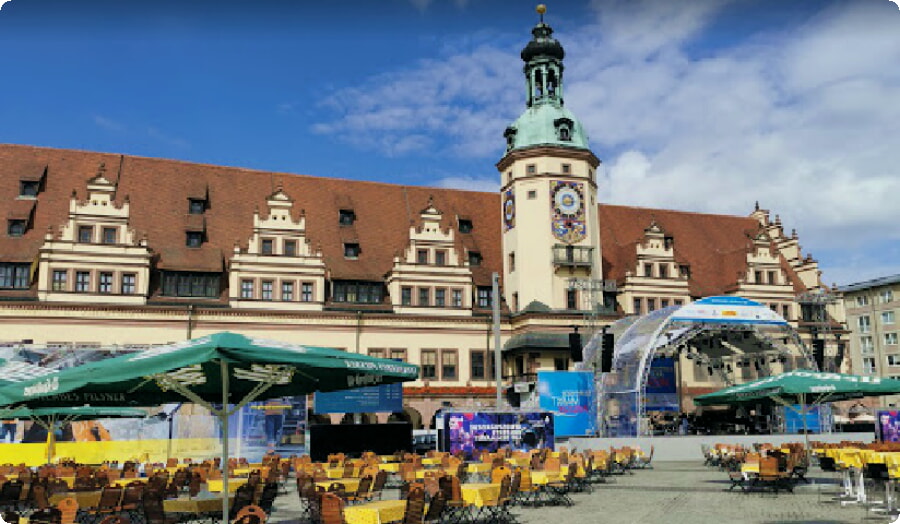 Richard Wagner was born here, Robert Schumann and Edvard Grieg shone, he served as a cantor in the Lutheran church, and also led the oldest boys’ choir in Europe, Johann Sebastian Bach. In Leipzig, Germany, even the locals hum the Mendelssohn waltz just like that, without thinking about marriage.

Breaking down the city into notes is worth it with German pragmatism, having studied the Leipziger Notenspur route first on the website, and then going on a themed walk – a five-kilometer circular route, marked with 23 stops.

The musical introduction begins on the square near the Gewandhaus concert hall – the home of the Leipzig Orchestra, whose most famous conductor was just Felix Mendelssohn.
Then the music line will lead past his house-museum, as well as the Schumann family apartments, the opera house, the music school, churches and memorial sites.

Many objects are enough to see from the outside, but you can’t help but look into the Cathedral of St. Thomas, the Church of St. Nicholas and the Museum of Musical Instruments, which has an impressive collection of more than 5,000 exhibits, including the oldest surviving grand piano (it was played for the first time in 1726).

It is worth going to the Town Hall building, where there is a portrait of Bach by Haussmann, and visiting the composer’s museum – Bosehaus.

After examining documents and musical manuscripts, ancient musical instruments, and numerous items related to the life of Thomaskantor Bach, spend some time in the south wing, the pearl of which is a concert hall with a gallery of musicians, which, if necessary, is hidden by a movable ceiling fresco.

Ludwig van Beethoven came to Leipzig only once, but it was here that the bulk of his works were published. A tribute to the composer should be paid at the Museum of Fine Arts, where there is a sculpture of a half-naked Beethoven by Max Klinger, which at one time caused a big scandal.

Leipzig will not disappoint those for whom there is no music sweeter than the roar of powerful engines. It is here that the Porsche factory is located, as well as the FIA-certified racing track owned by the brand. The track can only be called encyclopedic: its turns are repeated by the famous turns of Monza, Monaco, Rio de Janeiro and the Nürburgring.

The choice of car is yours: the range includes Taycan, 718 Boxster 718 Cayman, 911, Cayenne, Panamera and Macan. The rides are preceded by a tour of the production of legendary sports cars and a detailed briefing, so the whole program, costing from €330 to €370 (depending on the model), is designed for three hours. No less adrenaline-filled adventure will be the conquest of an intricate six-kilometer off-road route behind the wheel of a Cayenne.

If you’re afraid to take on the beast, do three laps sitting next to a professional racer in a Panamera 911 or 911 GT3 Cup. Prices are much more humane (from €98), but more than once you will feel how your heart sinks into your heels, and your stomach rushes somewhere up.