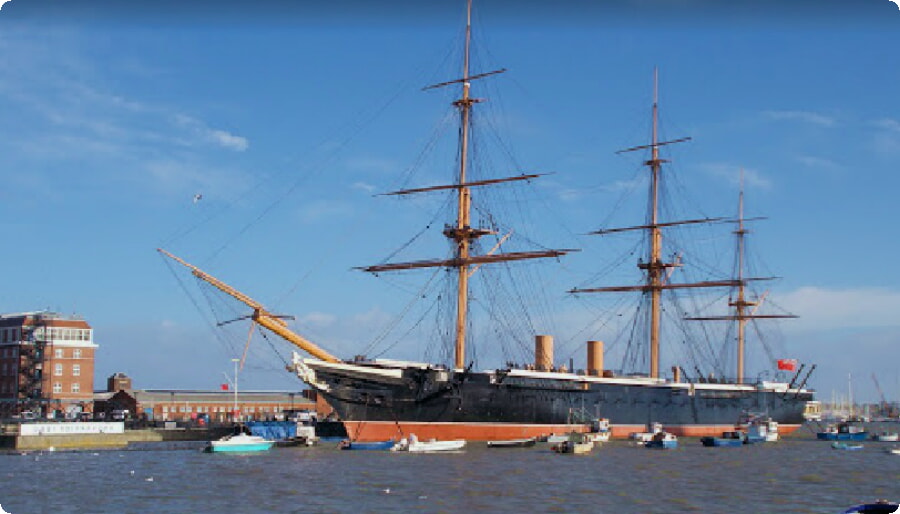 England has always had the fame of “mistress of the seas.” Several centuries ago, it had vast colonial territories that supplied it with foreign goods. The British were already so spoiled that they only ate food that came in batches from their colonial possessions. Of course, such a powerful country must have a powerful naval base.

Such an organization in Portsmouth was considered almost the most important in England. Similar bases were established at Davenport and the Clyde.

Portsmouth abounds with an incredible number of important aircraft carriers – the aircraft carriers Illustrious, Prince of Wales and Queen Elizabeth are located here. Portsmouth Naval Base is considered the oldest in the country, it proudly bears this title and regularly celebrates it.

The base is also attractive with another attraction – Portsmouth Historic Dockyard. This is a dry dock that has been used to build ships since the 12th century.

In those days, under Richard the Lionheart, everything was not the same as it is now – work on the dock was in full swing, in full swing, the sailors were shouting and arguing, the builders were adjusting different parts of the ships to each other, the priests periodically consecrated their work for the good of the country.

You have a great opportunity to go inside the old ships and watch them, visit the cabins, go fishing from the ship, climb the mast with the cabin boy. A caracca called the Mary Rose sank centuries ago, but it was recovered, repaired and docked as an exhibit. Now this ship is in special storage conditions – it is moistened with water, and it is protected by a special glass shell.

Of course, you can also look at his items, which belonged to the ship and were raised from the bottom by divers in 1982.

A curious exhibit of the dock is the Nelson Victory ship, which participated as the flagship in the Battle of Trafalgar. During the battle, Nelson was wounded right on board the ship, where he died. Surprisingly, this ship is still ready for battle, which insanely attracts history buffs.

Another ship called “Warrior”, which translates as “Warrior”, is made of metal.

She was launched in 1861, and at that time she was considered the best armored ship in the whole world. However, oddly enough, she was not allowed to participate in the battles due to the fact that she quickly became morally and technically old-fashioned, and she was replaced with newer, more maneuverable ships. This ship was used as a scientific and demonstrative exhibit, a model of the naval power of England.

The ship was restored, and in the 70s of the last century, she took pride of place in the Portsmouth Historic Dockyard. Come here and you will not regret it – there are so many interesting things here, things that you have only seen in pictures, in books about the travels of pirates and noble sailors.