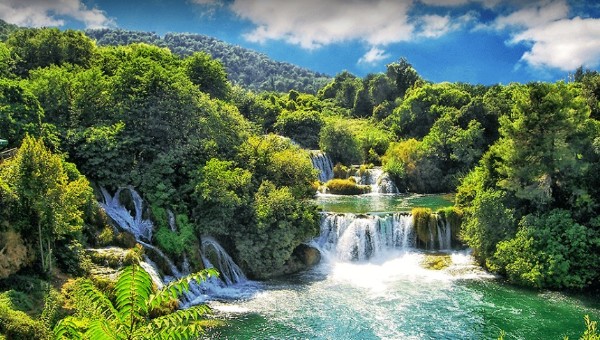 The most beautiful and one of the most powerful rivers in Croatia, where the flow is estimated at 50 m/s is Korka. Its length is only 73 km.

It flows from the Dinara mountain range, located on the border of Croatia and Bosnia, walking through Croatia, eventually reaching the Adriatic Sea in the Sibenik region.

On the way, it overcomes 242 meters high, forming waterfalls: Bilushich buk, Brlyan buk, Manozavak, Roszhak, Milyachka, and the largest and most famous of them – Skradinski buk, about 45 meters high.

The karst phenomena that this mountain river creates have shaped the waterfalls, making it a unique wonder of nature.

Calcium compounds that are released from the water and settle on the plants transform them into stones, which, in turn, overlapping each other, form terraces, and then, depending on the speed of the current, form islands or waterfalls. The fauna and flora of ecosystems is diverse.

In particular, river trout swim in the river, vipers and green lizards crawl on the rocks, and eagles, vultures and mountain crows fly in the sky.

In order to protect the unusual nature of the middle and lower reaches of the river, in 1985 the National Park of the Krka River was built on this territory, with an area of ​​over 100 km.