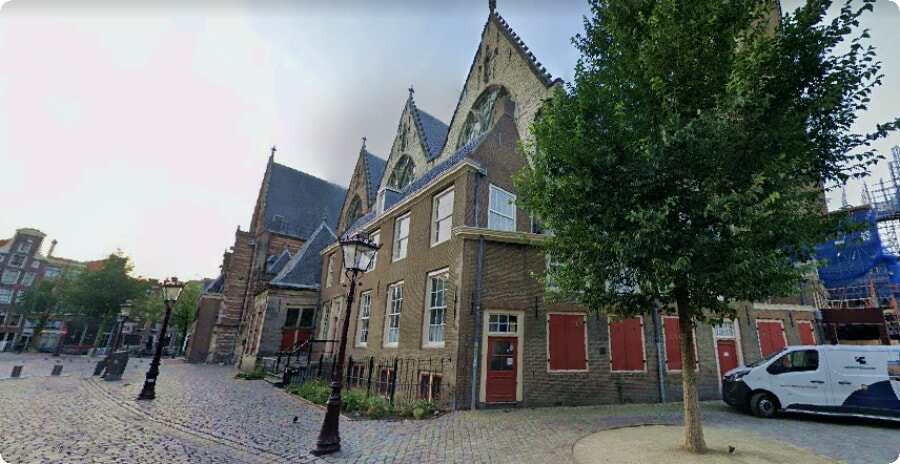 The Oudekerk is the oldest building in Amsterdam

Today, the capital of the Netherlands, Amsterdam, is a major tourist city, famous for its canals, houses with different brown tones and the Red Light District. It was there that the oldest building in the city was preserved – the Oudekerk church, which in translation means “old church”.

The history of this shrine, erected on the site of an ancient cemetery, began in 1306. At first it was a simple wooden church dedicated to St. Nicholas – the patron saint of sailors and merchants. Only 50 years later the building was rebuilt, and now it was made of stone. Even then, the temple was special: it combined two architectural styles – Gothic and Renaissance.
From the moment of construction until the XVI century.

The Oudekerk church was a Catholic shrine, but in 1556, as a result of military conflicts, the building was badly damaged, and some of the murals were destroyed. After this, services were not held in the church, and the building was abandoned for the next two centuries.

But according to some reports, at that time the Oudekerk was essentially a multifunctional building: marriage registration and trade took place here. In addition, the artist Rembrandt was very fond of the church, and it was there that his wife Saskia van Uylenburgh was buried.

In addition, the building was repeatedly updated: in the XV century transepts were added to the church itself on both sides, and the Oudekerk began to resemble a cross in shape. An important detail: the renewal process was interrupted more than once due to fires, as a result of which the district of Amsterdam adjacent to the church burned to the ground.

Most of all, the temple suffered, of course, at the beginning of the 20th century. But despite this, after the Second World War, they managed to restore it, and today it is one of the main attractions of the historical part of Amsterdam. On a huge area of ​​3350 sq. m located the church itself, the transepts and the bell tower.

The interior of the church is not very rich, since many items were lost during the wars. However, stained glass windows with scenes from the life of the Virgin Mary, painted in the 16th century, have been preserved inside. On the ceiling, you can see paintings with biblical scenes. There are three organs in the church: the first of them was created in 1658, the rest in the 18th century.

All of them are active: organ concerts are a frequent occurrence in the Oudekerk church. The temple is also famous for its bell: it was cast in 1450, it is the oldest in Amsterdam and, interestingly, it still rings, calling believers to the temple every Saturday. But the main feature of the church is its roof, which is made of Estonian wood and provides good acoustics in the temple, despite its age.

The Oudekerk Church today is essentially not only a religious building. It often hosts exhibitions and official events. Mostly it is visited today by tourists. The entrance to the temple costs 8.5 euros, and for this money you can see the shrine itself, as well as climb the bell tower, which offers a view of Amsterdam and the seaport.

The Oudekerk Church is a building with a rich history. Although today it has lost its original purpose, in the first place the temple is valuable as the oldest in Amsterdam. And its location is such that tourists rarely bypass this place.