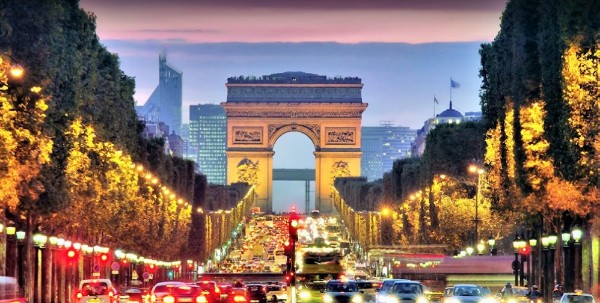 Tourism in France is of great economic importance. Many people visit this country every year. France attracts tourists with the richness and diversity of historical heritage. The culture of the country has been formed over the centuries under the influence of the life of the French, geographical conditions and historical events. Exhibition halls and galleries in France are visited by millions of people from all over the world every year. Some monuments of architecture and sculpture are under the protection of the UNESCO World Heritage Site.

Paris is not only the capital, but also the main political, economic and cultural center. In the city itself, as well as in its environs, there are a large number of attractions. That is why often the guests of the country do not know where it is better to go and what places to visit.

The Eiffel Tower is France’s most famous landmark. It was originally conceived as a temporary structure, but is now undoubtedly the most recognizable symbol. It was designed in 1887 and built in 1889 as the entrance arch to the World Exhibition held in Paris. The tower was named after the chief engineer who led the construction process, Gustave Eiffel.

Initially, the building was not enthusiastically accepted by the Parisians, but later became an integral part of the city. In the first years after its construction, the Eiffel Tower was used for various purposes. It served as a location for radio stations, and was also actively used to establish telephone and telegraph communications. With the development of television, the Eiffel Tower is being used to install antennas. The Eiffel Tower is the main observation deck of the city, it offers a view of the entire city.

The Champs Elysees is the central street of Paris. This is one of the most picturesque and romantic streets of the city, a must-see for all guests of the capital.

Arc de Triomphe – the most recognizable architectural structure in Paris, is located on Charles de Gaulle Square. It is a symbol of the conquests and military victories of Napoleon, was built on his orders. The building was made in the antique theme and decorated with bas-reliefs. The arch is one of the main viewing platforms of the city, it also houses a museum.

The Louvre Museum is on the list of the most famous museums in the world. Its collection includes over 300,000 exhibits, 35,000 exhibition halls. In 2018, about 10,000,000 people visited the Louvre, which was a record. The museum itself and all its contents are under the protection of the UNESCO World Heritage Site. For more than 200 years, the Louvre has been opening its doors to visitors.

France is a country of gourmet cuisine, picturesque landscapes and great conquests. In France, it is possible to find an opportunity for both active and beach holidays. Every tourist should definitely enjoy its beauty!