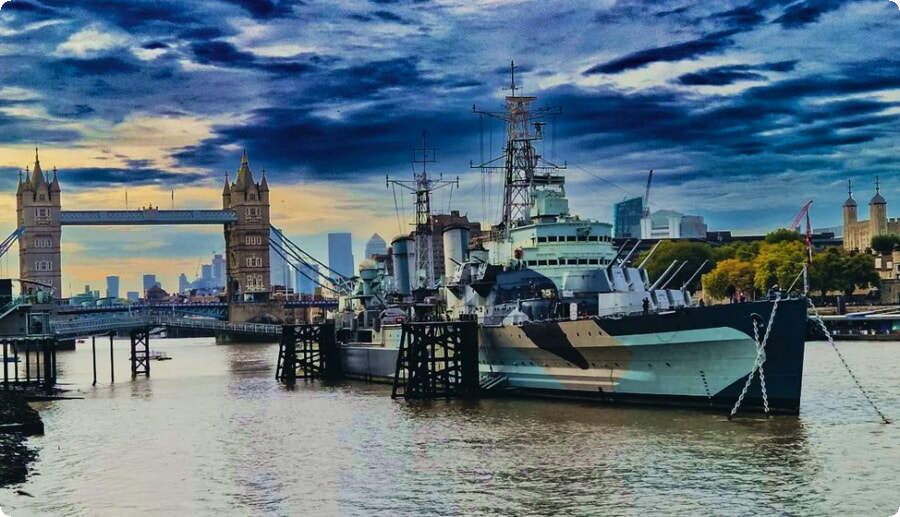 Where to go with a child in London

The capital of Great Britain has created very favorable conditions for family holidays, so in response to the question “Where to go with a child in London?” you can suggest a dozen of the most worthy places to relax with children.

When visiting Buckingham Palace, it’s hard not to notice a warship standing on the Thames directly opposite the main symbol of the city. This warship bears the name “Belfast” and is a veteran of the Second World War.

Today, Belfast houses a branch of the Imperial War Museum, which can be accessed by absolutely anyone who has bought a ticket for the price of six pounds. In Belfast you can look into almost every corner of the ship, including artillery cellars and numerous cabins.

Mannequins are placed all over the area of the ship, and a real emergency situation is recreated in the hold. According to the scenario, the bottom of the ship was hit by a torpedo, and the team that arrived is trying to fix the problem by patching up the hole. And all this happens with the participation of light and sound effects, which makes the spectacle even more exciting. Of course, every child will appreciate the veteran ship by right.

Continuing the theme of “where to go with a child in London”, it is worth talking about the Maritime Museum of Great Britain. From Buckingham Palace it is also easy to get to Greenwich – the largest historical and cultural complex in the city. Here is the Maritime Museum. The main exhibit of the museum can rightly be called Admiral Nelson’s suit, on the shoulder of which you can see a hole from a fallen fragment.

A very large collection of marine navigation instruments is also exhibited here, some of which belonged to Captain Cook himself, and on one of the stands the ticket of a passenger who was late for the first last flight of the Titanic is carefully stored. From the curator of the museum, children will be able to learn about what they ate and how British sailors spent their time on a long voyage. And the ships on which they set off on a long journey can be seen in the numerous models that the museum is so rich in.

Of the other interesting museums where you can go with your child in London, the Museum of the Royal Air Force in north London deserves due attention.

More than a hundred aircraft are exhibited on a large area of the museum, ranging from the first flying machines to modern fighters and bombers. The museum is open daily from ten in the morning until six in the evening, and admission to it is completely free.