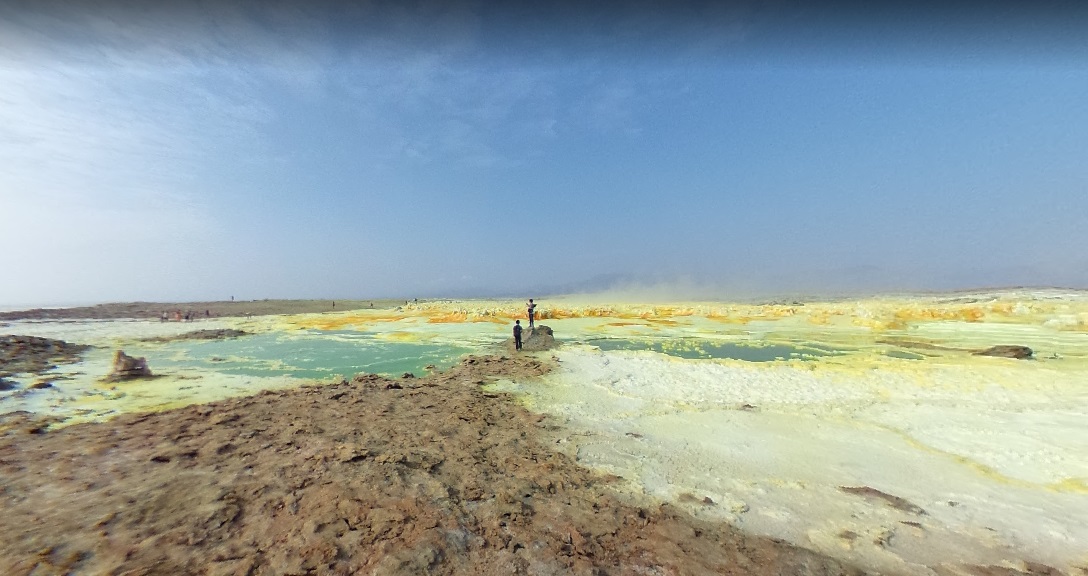 If there are extraterrestrial landscapes on Earth, then the Dallol volcano in Ethiopia is one of the most striking examples. The volcano and the area around it seemed to have descended from the paintings of artists who imagined what Mars or Jupiter might look like.

The amazing Dallol volcano is located in Ethiopia and belongs to the most mysterious and little-studied places on our planet. It attracts travelers with its unusual beautiful landscapes. The Dallol volcano is an active volcano, it is located at an altitude of 48 meters below sea level. The volcano’s mouth is surrounded by hills 60 meters high, which rise above the salt plains.

In 1926, there was the last eruption of the Dallol volcano. Then an acid lake was formed here, which, according to scientists, enriched the local landscapes with incredibly bright colors. Salt volcanic plains look like fantastic alien landscapes, amaze with their splendor and uniqueness.

The area in which the Dallol volcano is located is difficult to access and is not a popular tourist route. There are no roads here and the only way to get to the volcano is the caravan route of salt miners.

The crater of this volcano quite plausibly demonstrates what is happening on Io, a satellite of Jupiter: a lot of bubbling geysers, fantastic colors and an insistent smell of sulfur.

Located below all other volcanoes in the world – minus 48 m from sea level – Dallol is still active, thanks to which the nearby surroundings are constantly bubbling and boiling. But the last major eruption occurred in 1926 — that’s when the “extraterrestrial” lake was formed, which is a bizarre salt formations framed by puddles of green and purple liquid.

Here, red-hot lava flows directly from the rocks, and the whole earth, if you can call it that, is covered with a crust of salt, painted in the most bizarre colors due to the effects of sulfur. Wherever you look, there are amazing natural formations in the form of salt columns, alien umbrellas and other figures that appear here thanks to hot springs and geysers, and in the southwest of the volcano there is a whole salt canyon formed here due to erosion.

Dallola crater is the hottest place on Earth: the average annual temperature here is 34 degrees Celsius. In such a heat and such an aggressive environment, no form of life other than bacteria can exist. It is they who provide vivid color memories to every visitor of this inhospitable place.