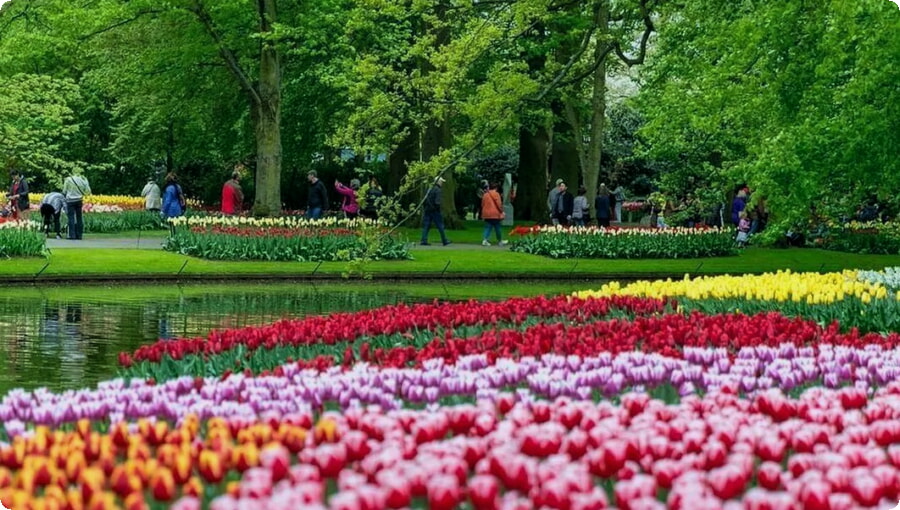 Keukenhof is a royal flower park (primarily bulbous and lily varieties of flowers are represented on its territory), located in Holland, on the territory of the small town of Lisse, which is located near the North Sea coast. Every year the park is open to the public, but only for a few months – from the end of March to the end of May.

The history of this attraction dates back to the 15th century. At that time, this area was completely covered with trees and played the role of the hunting grounds of the Dutch monarchs.

For those who lived in the nearby Teilingen Fortress (now in a dilapidated state), the wooded area that occupies the territory of the modern park area was a rich resource. The area near the fortress was used to grow greens and various herbs for kitchen needs. This is where the name “Keukenhof” came from, which means “kitchen yard” in Dutch.

Towards the middle of the 17th century, at the request of A. M. Blok, who was the head of the island of Ambon, a manor appeared on the territory of the garden. At the beginning of the 19th century, it was owned by Jan Stengracht, who was an ardent admirer of art. In the 1860s the main dwelling was de facto converted into a neo-gothic castle.

The immediate idea to create a public flower park that would generate income from the sale of flowers, originated with flower manufacturers only in the 40s. XX century. It was decided to make a visual collection for the flower trade. Not only tulips began to be grown on the territory of the park – hyacinths, sakura and daffodils appeared here.

The park was demonstrated to the general public in 1949. This year, small businessmen specializing in the sale of flowers staged a flower exhibition in this place, which was solemnly opened by the Dutch ruler Juliana. Her husband, Prince Bernhard, went on to create a couple of documentaries that describe the park area.

Description of the park

This metropolitan landmark covers an area of ​​32 hectares. Here you can see about 7 million flowers of bulbous varieties – of which two-thirds are tulips of one hundred different varieties. This place is home to many water features, most of which are boatable. The shores of numerous lakes and rivers are connected by several dozen bridges of various lengths and sizes.

If you add up the length of all the paths for pedestrians located in the park, then it will reach about 15 km. When walking along them, there is an opportunity to notice numerous sculptural works of Dutch and foreign specialists located along them: Bruning, Taratynov, Kervel. Almost 100 species of trees are represented in the park.

On the territory of the park area, in addition to the above-mentioned objects, you can see the pavilion of royal hats and a pet farm.

Every visitor to Amsterdam will definitely appreciate this attraction.