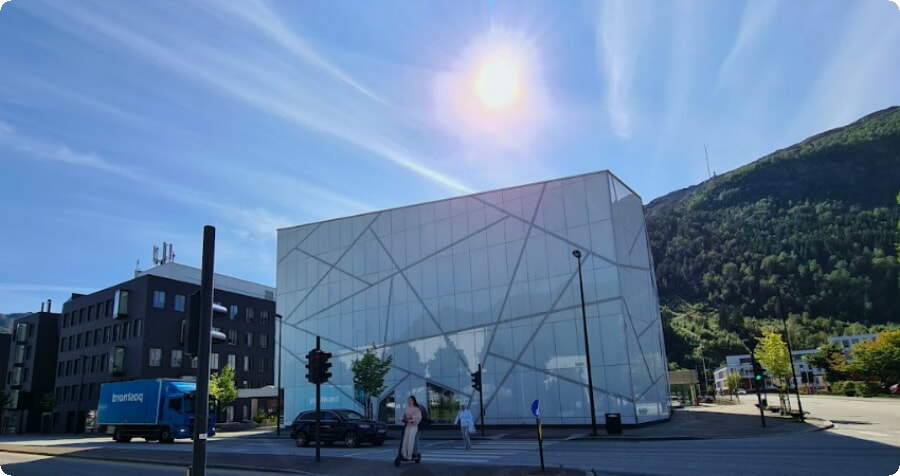 This famous ice colossus has shaped the face of Vörde, which previously offered tourists neither the traditions of the old town nor the architectural monuments. The situation changed when the art museum Sogn & Fjordan was erected in the central part of the city.

The phenomenon known as glacier greening was a natural inspiration for the museum project. This is a process in which huge masses of ice break off its edges and fall into the sea or into a valley.

The museum building symbolizes such a cracked piece of ice that defines its distinctive identity and character. The authors of the project from the Scandinavian architectural studio Mller Architects wanted to create an attractive building that would become one of the features that define the city. It was Jostedalsbreen that inspired the architects and had a significant impact on the appearance of the museum.

The facade of the building clearly stands out against the background of the surrounding buildings not only for its aesthetics, but also for its symbolism. The upper part of the museum is covered with a StoVentec glass façade system, the first layer of which is made of white glass panels.

In addition, there are slanted lines on each of the walls of the building, reminiscent of natural ice cracks. This combination of cold glass, snow-white and geometric axes resembles an urban version of a glacier.

The effect intensifies after dark when the lines on the building’s façade stand out, turning the museum into a glittering chunk of ice.

What defines the building of the Sogn & Fjordan Museum is the geometry. Its features can be found not only in the system of intersecting lines on the facade, but also inside the building. This is especially evident from the triangular atrium with an icy staircase.

A staircase connects the four floors of the exhibitions and leads to a wooden rooftop terrace overlooking the charming surrounding countryside.

The Sogn & Fjordan Museum is a regional art museum whose main task is to interest and expand knowledge about the fine arts and crafts in the Sogn og Fjordan region. It presents about 4,000 exhibits daily and also regularly organizes temporary exhibitions of contemporary art.